A vigil was held for the people of Ukraine in Pontypridd on 6th March 2022, just over a week after the barbaric invasion by Russia.

Council Leader Andrew Morgan opened the event and introduced all the speakers.

First to speak was Mick Antoniw, MS for Pontypridd. Mick is perfectly placed to understand what is going on at the moment, he comes from a Ukrainian family, with a Danish mother and came to the UK as a result of his father seeking refugee status in the UK following World War Two.

Mick had been out in Kyiv the week prior to the invasion to show solidarity with the trade unions and the public sector workers.

Following the invasion he set up a fundraiser which went far better than he has expected.

Mick stated: “I was asked by people I know personally in the Ukraine for financial assistance, to purchase specific medical equipment for use in hospitals, so I and my team set up a a crowdfunder to raise funds.

The initial target was £5,000, but the generosity of the Welsh people, and some from further afield, meant that donations reached over £43,000. I’m incredibly grateful for every single donation, large or small.

The crowdfunder is now closed, and I’m currently waiting for money to be released by the crowdfunder.co.uk site. Once I have this, I will begin the process of getting the money to my contacts in Ukraine, who urgently need the money to buy specific medical supplies.

In his speech Mick relayed stories from friends and family in Ukraine and the hardship they are currently going through, including his 74 year old cousin who is getting armed and ready to fight for his country.

He also had praise for those in Russia that have been trying to oppose this war.

Mick: “In a country that has no free press and no free speech, a country that has become totally totalitarian, those people protesting against the government are putting their careers, their lives and their liberty at risk. My heart goes out to them because they are the future of the Russian Federation, not the people around Putin.”

Touching on a personal issue, Mick referred to his cousins who are getting ready to defend the country and their desire to be able to know that their wives and children are safe. They have asked if they could come and stay in Pontypridd with Mick.

Mick: “I have been asking and had support from Alex (MP for Pontypridd) but I cannot get them visas. The idea that someone trying to escape a war zone have to apply online for a visa is ridiculous and an absolute disgrace. I am prepared to put up members of my family, but I cannot get them into the country.”

Alex also spoke to the crowd and was appalled at the idea that people fleeing a war are being told to apply for visas to pick fruit! A theme also picked up on by Bethan Winter MP for the Cynon Valley.

Beth spoke as an MP and as a mother, speaking of how she, as an individual, is appalled at the suffering people are going through and distraught when she sees the faces of children hiding in cellars.

Bethan: “The world has been a sad and frightening place for far too long. From Yemen to Palestine, Saudi Arabia and now Ukraine. Like Martin Luther king, I have a dream. My dream is that we can have a world free from weapons, free from war, a just, fair world. That is my dream.”

Other speakers included Councillor Maureen Webber and Buffy Williams MS for the Rhondda.

Throughout the event the speakers were flanked by members of local veterans organisations, who lowered their banners as the Ukrainian National Anthem was played and helps with a collection in the crowd, raising £1625.10 on the day. The money has been paid directly into the Disasters Emergency Committee Ukraine Humanitarian Appeal.

There are numerous organisations raising money for the people of Ukraine. Below you will find links to some of those organisations.

Giving money to Ukraine: Where to donate to help refugees | The National Wales 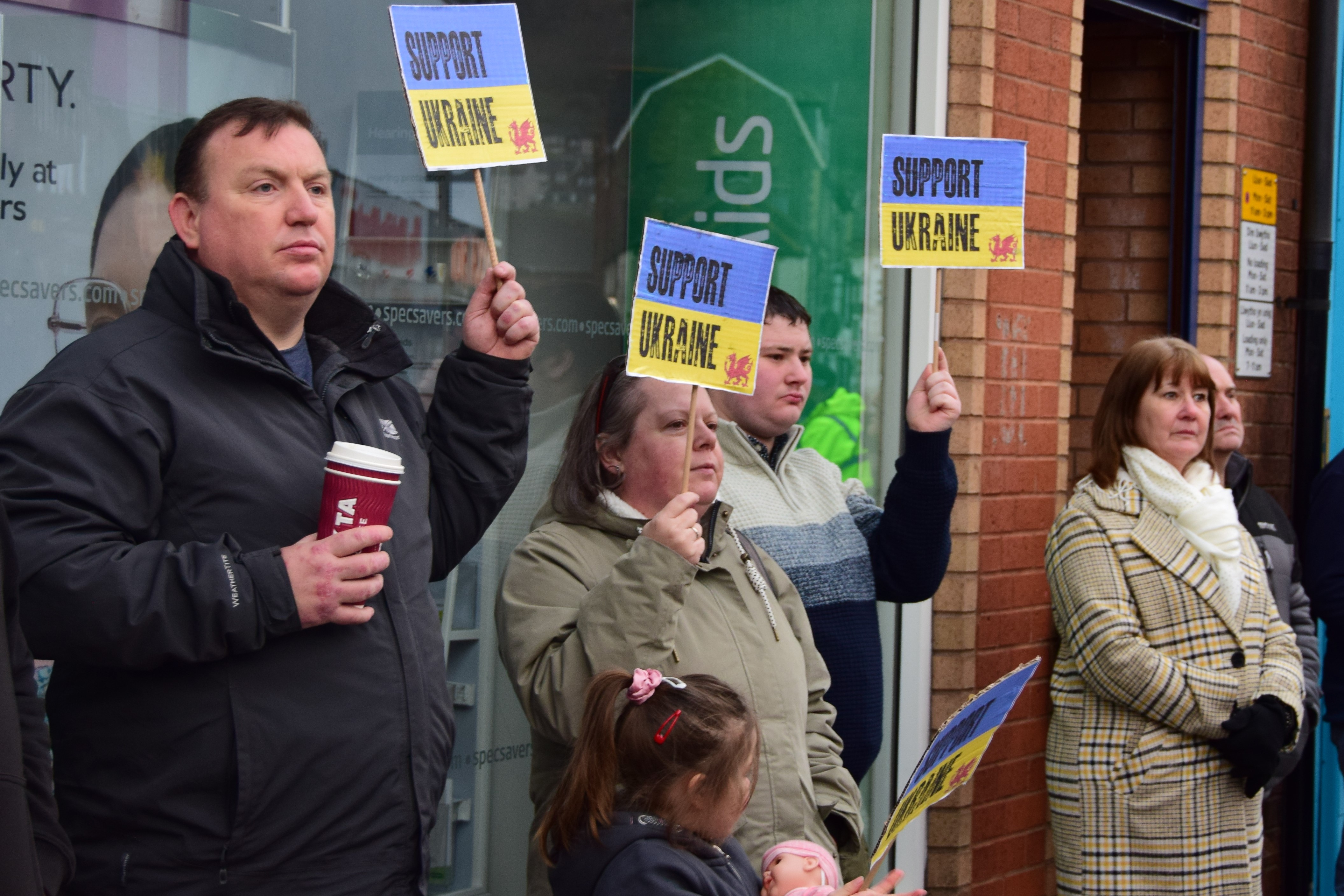