There was ‘Peace in the Valley’ of Merthyr Tydfil over the Whitsun bank holiday, as the red flag was flown high once more to commemorate the 1831 uprising.

Three thousand festival goers from all over the UK landed in the town for the best value festival in the country, Merthyr Rising. A festival that mixes music, ideas, art, culture, food and beer.

The weekend kicked off in earnest on the Friday with speeches from Roger McKenzie, Assistant General Secretary with UNISON, the festival’s main sponsor, in both the Red House and on the main stage.

Once the introductions were over, local hot new hopefuls, Pretty Vicious got the sun baked crowd rocking, leaving us in no doubt that this was going to be a party to remember.

On Saturday, after a history walk around the town, Thee Faction got everyone thinking as well as dancing, all be it that many were hiding from the rain and watching from the bar. Their brand of socialist r ‘n’ b provided the perfect mix of music and politics, entertaining both the hip young gunslingers and the Morning Star Readers at the back.

With talks, debates, music, beer and food on the agenda, it is impossible to catch everything that goes on, but other musical highlights from Saturday included, Tredegar lads on the up, The Sandinistas; Mad Max lookalikes The Digital Criminals; unashamed metal heads Florence Black; the youthful and – erm – upbeat – Upbeat Sneakers. The show was then wound up with a blinding funky set from the Stereo MCs, creators of one of the best albums on the 1990s. They came, they saw, they stepped it up, they connected.

Whilst all this was going on, over in the Red House there were talks on feminism and the scandal of the government’s ripping off of the miner’s pension fund, alongside comedy from Fransesca Martinez, music from David Rovics and Cosmo, and live TV debates for RT. 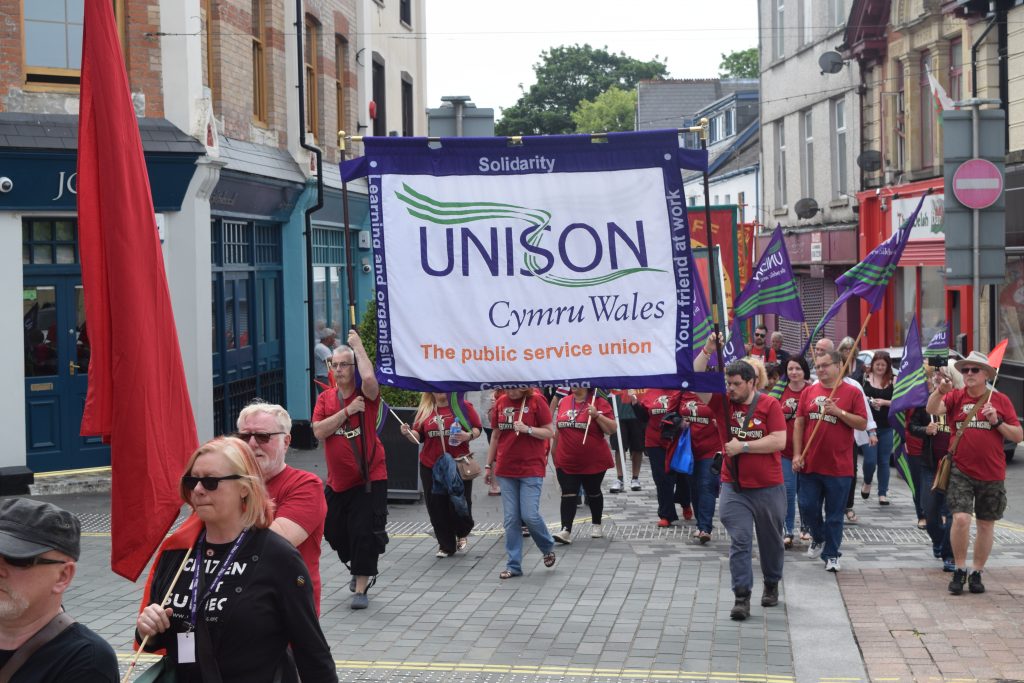 The sun came back out on Sunday and hundreds turned out for a trade union banner march through the town before talks on trade unionism, music and politics, and the centenary of the Russian Revolution in the Red House.

Meanwhile, out in the sun, revellers were entertained by the likes of Fire Road, The Moonbirds and post punk legend Tenpole Tudor. The hard-core that made it to the end of the weekend still able to stand up were treated to a performance by the Alabama Three that is going to be talked about for years to come.

It is little knows that, despite the accent, Larry Love is actually Merthyr born and bred, and for the last few weeks has been as excited as a kid on Christmas eve about playing this show. And boy did they pull out all the stops. The crowd were rocking from start to finish – but the best was yet to come. For an emotional finale, the band gathered at the front of the stage, fists aloft, holding a giant red flag, symbol of the 1831 uprising. There was, as they say, not a dry eye in the house.

And then pffft – it was gone in a puff of sweat and smoke. Ten months in the planning, by a small band of dedicated locals, a labour of love, a love of the town, and a love of its history – and in three climactic days it was over.

And when it was over, positive vibrations of love were thick in the air, with no one in any doubt that they wanted to roll up their sleeves and crack on with getting ready for 2018.

UNISON is proud to have been sponsors of the event and hope that the relationship with the organisers can continue into the future.